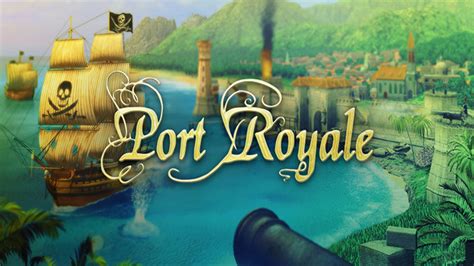 When I first found out that, I was going to be playing Port Royale I was worried about it being a game that was trying to take advantage of the recent Pirate craze. I was pleasantly surprised to find out that Port Royale is a lot more. You control a number of ships, trades, and battles all taking place in the 16th and 17th centuries. You will explore the entire Caribbean and a number of different ports. The economic system is a lot of fun and the combat although difficult to master makes for a fun experience. In addition, yes there are pirates but they are not the center of the game. It is truly a game about building Trade routes and economic developments within the port cities.

The developers at Ascaron have spent a lot of time making a very aesthetically beautiful game. At first glance while in a town, it reminded me of Roller Coaster tycoon. Your perspective is from a bird’s eye view of the world. You look down on the town. You are able to zoom in and out and scroll all around the map. In addition, while in the town mode you will see all sorts of interesting items such as Seagulls flying and the smashing of waves on shore. In addition, the buildings in the town are always busy doing something. There are also all sorts of characters walking around.

The second window is the bigger navigation map, which is where you go when you want to move from one port to the next. In this map, which is of the Caribbean, you choose your convoy and then select the path to the next city. You can also just move ships to locations with simple left clicks. This map is very active as you move through. Other ships are moving through the seas. This map allows you to see the fact that there are many ships moving through the world and that you must move fast. In addition, you can see what Countries the ships or ports represent. Although the Navigation map is not super, exciting it is very functional and gets you to the cities and ports that you need to get to.
Finally are the graphics of the interfaces. These include everything from a minimap to the Trade screens between your convoy and town. Everything within the graphics of the interface make you feel like you are in a ship or are back in the 16th century. In addition, the interface windows are very flexible. You can close out and open windows all the time. In addition, they never really completely block the great looking world.

The graphics make a great game; the concept relies on the open-ended style of the game design. The story consists of you being a ship boy and working on building an empire of trade and economic control. You use your economic skills to buy supplies from one town and sell them in another town. If you learn, which towns need what supplies you will soon have a very effective company up and running. Once you get the hang of things, you can gain missions from governors of towns who will send you out to collect a certain amount of items or find new towns. In addition, a large part of the game is building up towns with your buildings such as supply buildings and getting townsfolk to like you and your group more.

Although the storyline is nonexistent, this does not mean there is not a lot to do. With the ability to pause and speed up the game time you will need to pay attention to the date as many of the missions have deadlines you must complete them in.

Along with the graphics and open-ended game design, there is the sound, which is basic. Of course, most of the time there is a lapping of waves pounding against the shore. In addition, a little tune plays for most of the game and also beeps and clicks as you make trades or blaring music when you get into a battle. Now the sound is nothing to scream and holler about it does portray the game play and lives up to the great surrounding and adventurous world of swashbuckling fun.

When you first start the game after watching the Opening cinematic, you get to choose from either Multiplayer, Tutorial, or New game. The Tutorial is a very extensive training on how to play the game. It walks you through how to use just about every aspect of the game. It also takes a very long time to go through. The Single Player game starts out by allowing you to make all sorts of decisions about your company and colors. You get to choose what type of flag you fly over your ship you also get to choose a time period as well as what country you would like to be affiliated with.

You start out in a town with a single ship and a certain amount of money. From this point, there are a number of different options for you to do. In town the key buildings that you will be spending a lot of time is the harbor building where you conduct most of your trade business. Here you see what the town has for sale as well as what you have on your convoy. You also see the price for buying goods as well as the selling price. You also see how much you bough the goods for. From here, you also can buy Cargo for your ship such as Cannons, Rifles, Swords, Cannon balls. In addition, a number of other things. You also will need to hire enough crewmembers to an all of your ships.

Although most of your time is in the trade window, you will also visit the churches of towns to increase the morale of your crew by purchasing blessings or praying. You also can visit the town halls and visit with a number of officials including governors who give you missions. Also, while in town if you want to gain favor with the people you can donate money to provide more defense for the town.